OK – here’s our hunt giftie for the Where’s The Love Hunt. It is a wonderful triple-purpose prize -

Onesies: So at its base, this is a Parcel Media URL Changer. For each parcel of land in SL, there is the option of having that parcel tied to a particular music source. SL music works on Shoutcast technology, which is what underpins internet radio. Any parcel owner can set their parcel’s Music URL in Land Properties to an internet radio station of their choice.  For anyone Playing Streaming Music, as soon as they set foot on your parcel, they’ll hear the internet radio station that you specified.

But how do you specify the internet radio station you wish to play on your land? There are a number of ways, but the easiest is to rez this radio. Once rezzed, this radio presents you with pushbutton selection from a dozen radio stations. How simple could it be? Not much simpler. Push a button, get a new station. Yay’s ‘n’ stuff!

Twosies: We don’t often talk about it, but we all know it. How does a prospective suitor get a woman in the mood for love? Romance her, flatter her, feed her, whisper sweet nothings in her ear, open the door for her, hold her, give her flowers, hold her hand – wait – those two were in the wrong order – you’ll need to start again at the top. How do you get a man ready for love? Umm, no work required. The subject of many a song and many more a joke. This radio reflects that duality.

Threesies: This radio comes pre-loaded with a dozen great radio stations covering genres from Electronica to Country to HipHop to Folk to whatever — even including three stations dedicated to SL artists. But what if your favorite internet radio station isn’t included in the offerings? No matter! The music URL changer script is modifyable. Further, it is commented in a way that a new scripter can follow the embedded instructions to add their own favorites. Learn an intro to scripting and yield a usable artifact in the process – what could be more rewarding? None! 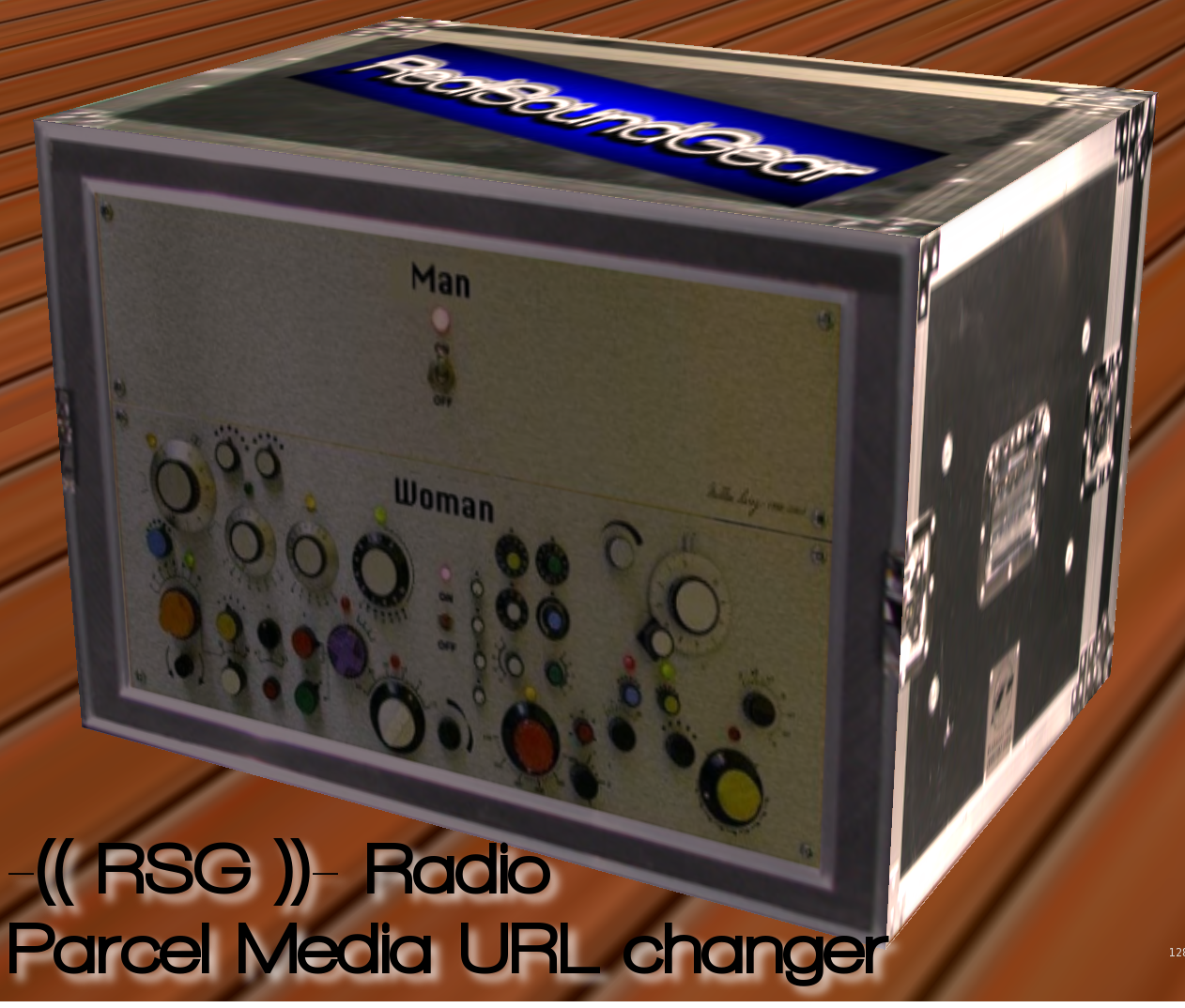 Well, here’s something new. Actually, here’s a couple of somethings new. And it promises to be a fun time for all our current customers, as well as drawing new people into the fold.

New Thing #1: RealSoundGear will be stop #65 on the Where’s The Love grid-wide hunt. I’m hoping we meet a lot of new people, as they drop by our little link in the hunt chain. I presume most in the audience are familiar with these hunts – but if not, you really ought to give at least one a try. It’s a great way to have a lot of fun, while stuffing your inventory with cool new stuff. 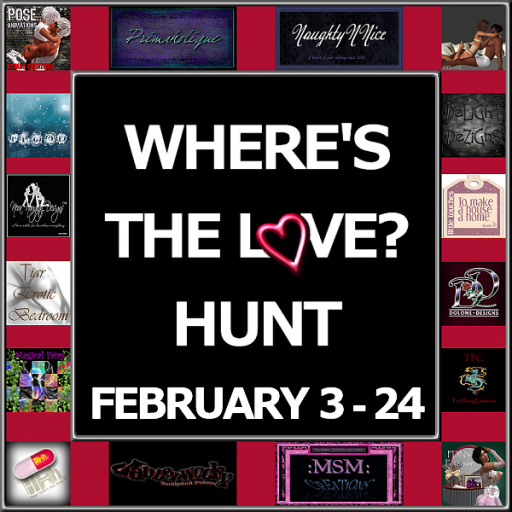 The Where’s The Love? hunt is a production of the Happy Hunters Hunts group, mostly corralled by Jessicah Spyker. They’ve had quite a few great hunts so far, and we’re happy to be a part of their newest quest.

New Thing #2: The item we are giving away for the Where’s The Love hunt is quite a departure from the wares you’re used to us providing. We’ll be rolling out details as the next few weeks progress, but we can give some hints.

As you are out adventurating around the grid, it will provide a soundtrack for those left pining your absence at home. Moreover, it will allow you to set the mood of the home fires. Upon your return, of course, you will be met with a most appreciative audience, awaiting your triumphant return.

half off xmas sale!

To celebrate the holiday season, we have marked down all our fine wares by 50%! Only at our mainstore. Only for a limited time. 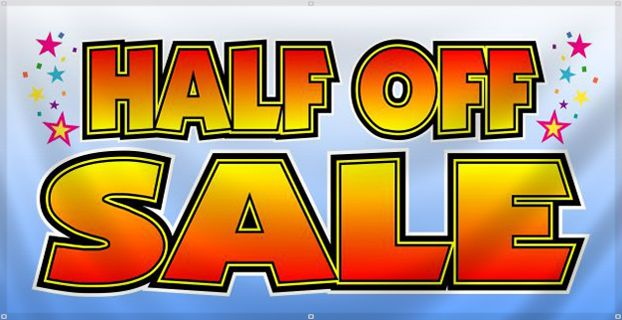 subwoofers are what get the dance floor moving

Screaming guitars? Got it.

But somehow, a club just ain’t a club, until the floor shudders with every thud of the kick drum. Pulsating, bone-jarring, vision-blurring — the low end comes to us courtesy of subwoofers. If you really want the excitement of a musical hot-spot, you need some good subs.

Guess what? -(( RSG ))- makes subwoofers. Good ones. Ideally matched to our mid-format line array, our VT4881 are just the ticket for getting the dance floor jumpin’.

The VT4881 is faithfully modeled upon an RL counterpart. Premium single 18″ units, with exceptional low-end excursion. Grab a single for a small room, or one of our convenient pre-stacked arrays for your large open-air concert venue:

each one single bitty little prim. Sure you could buy the 1 x 1. and link any of the arrays yourself. But if you let us do the stacking, you save on prims. 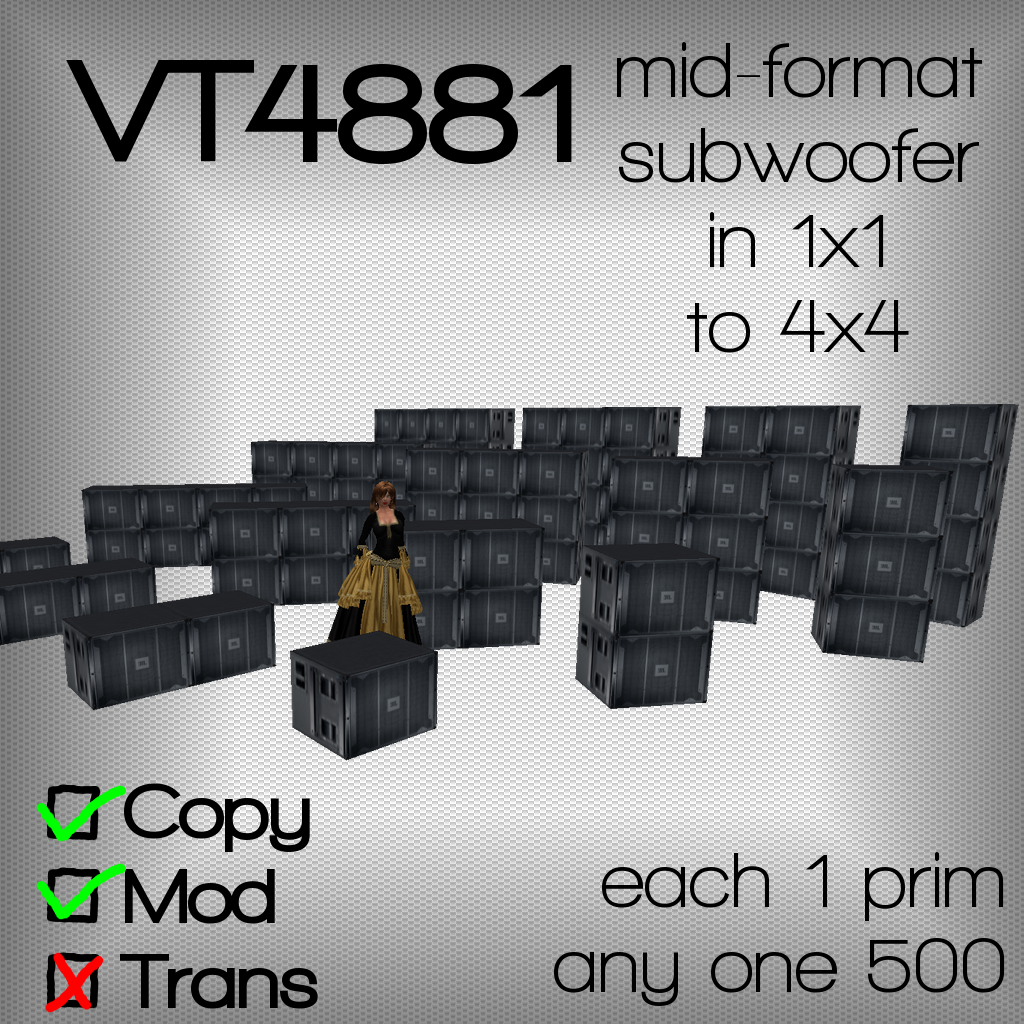 Like our companion mid-format line array, these come as Yes Copy; Yes Mod; No Transfer. Any copyable stack just L500.

Get to your nearest -(( RSG ))- location and get the dance floor moving today!

…who remembers Five Man Electrical Band? … or even Tesla, for that matter?

Ideal for most venues, our mid-format line array forms the core of your system.

The -(( RSG ))- VT4887 is a full-range, mid-format line array cabinet, conveniently preconfigured in a 12-element J-hang. 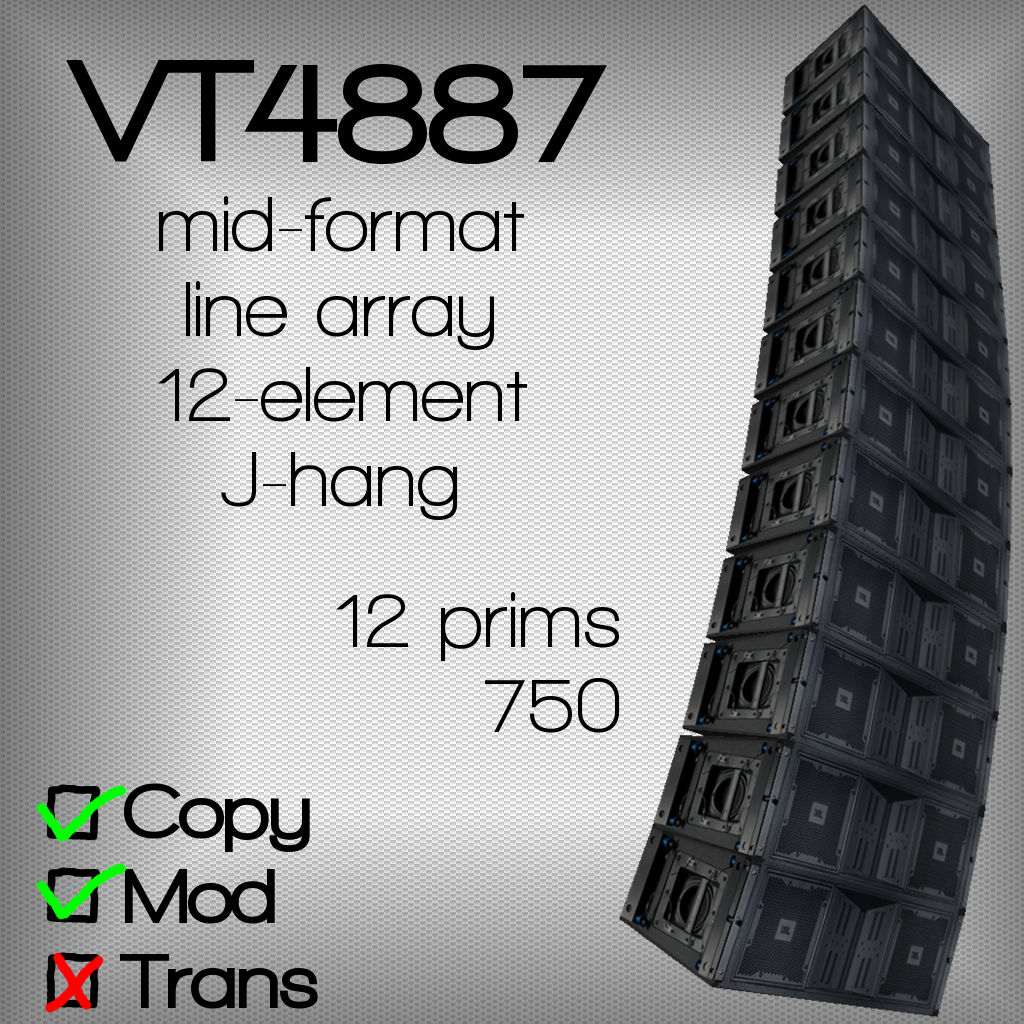 Our 12-box hang of this mid-format line array system is optimized for the vast majority of metaverse venues. Already linked and curved, this is the proper solution for venues from 1024 to 4096 square meters.

We provide copy perms, so you need buy only once. It is also mod perms — if you want a shorter hang, you can just unlink cabs. You could even re-link a longer array, if such is desired. Heck – make a couple main hangs, a couple delays, and even several fills — all from your reasonable first time investment.

You want the best for your visitors. The proper sound system leads directly to more booty shaking… to more fist-pumping… to more fun. Visit one of our -(( RSG ))- locations today and get your venue amped with the VT4887.

It’ll do ’til I learn more about Gimp…

We just finished an install at Solana’s Place.

This fine venue is one of the busiest in Second Life. With a tireless staff, and always a friendly smile, Solana’s Place brings you some of the finest talent on the grid.

We’ve just upgraded the sound system there with: 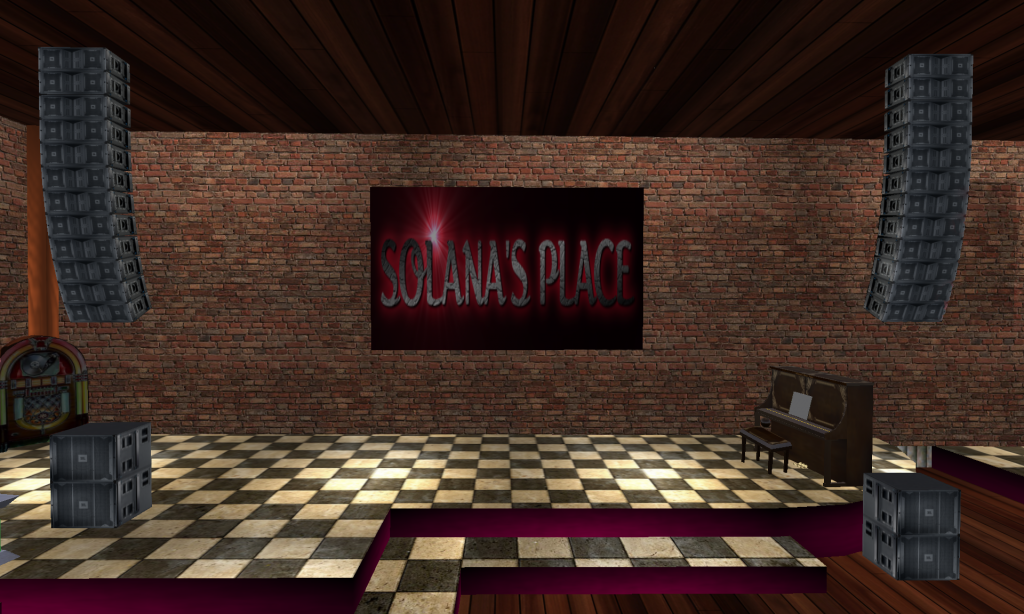 “We’re quite pleased to have been selected by Solana’s”, says Krell Karu, general manager of RealSoundGear. “It is a top-notch venue, and now has sound to match”. “We truly value her endorsement of our systems.”

“I’m really enthused about the new system from RealSoundGear”, says Solana Python, proprietress of Solana’s Place. “They really lend a finished, professional look to our concerts, and of course they sound just stunning.” 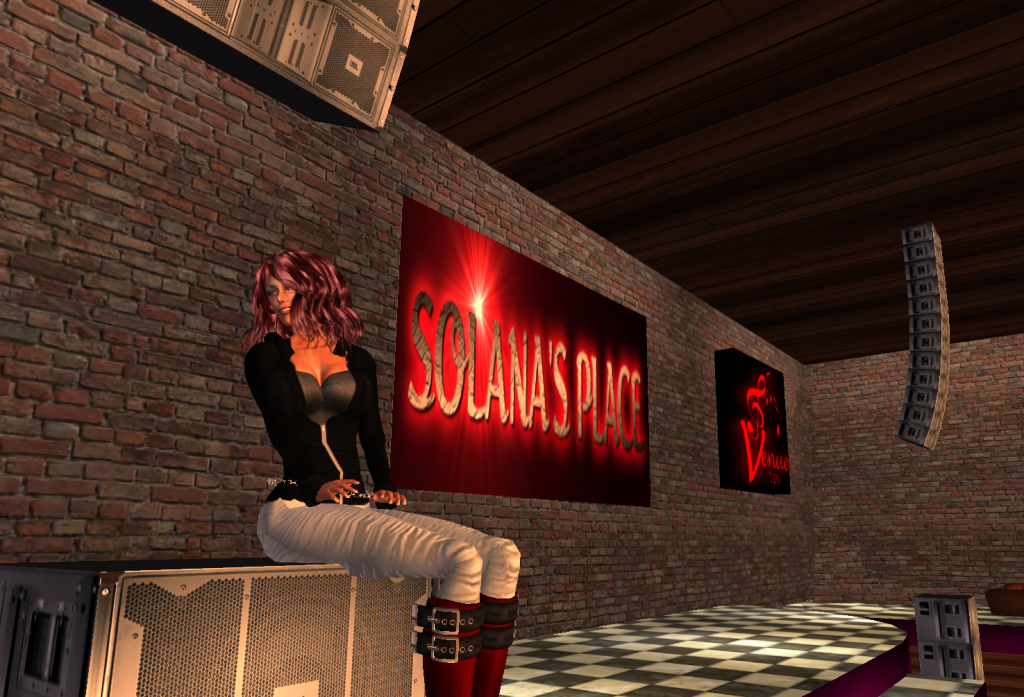 You can see and hear the RealSoundGear mid-format line array for yourself at Solana’s Place, at one of the many shows produced there:

If you decide that this is the ideal sound system for your venue as well, you can ‘buy as copy’ any of these pieces. They are all Yes Copy; Yes Mod; No Transfer. Or see our full line at one of our regular shops.

RealSoundGear is finally up and running. We’ve taken out a stall on the lower level of Two Roses bar & club equipment mall. Kind of a natural fit.

Come visit us! We’re just getting things organized, but have some lovely wares set out already. 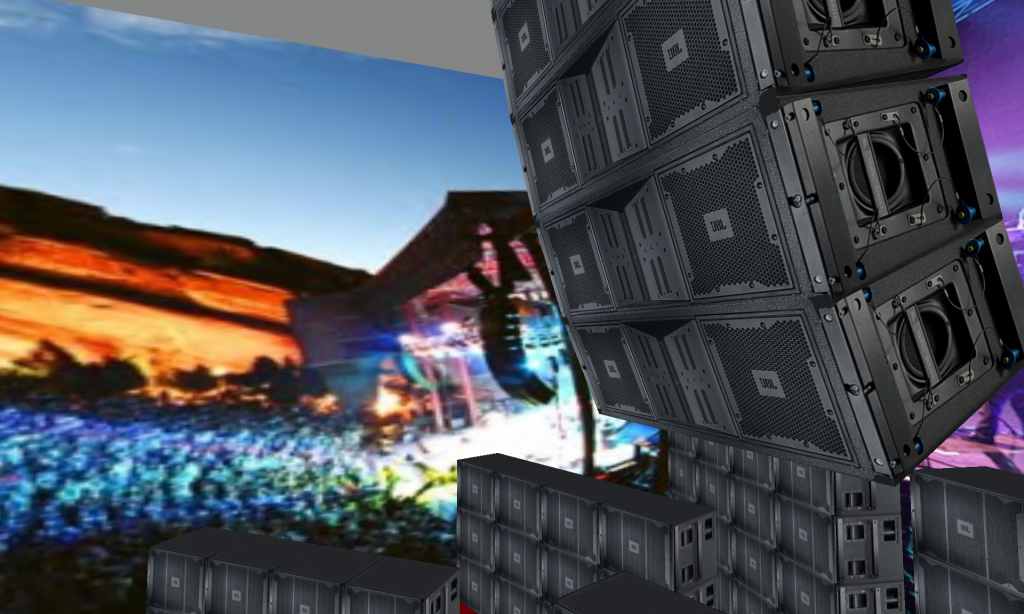 Check it out – we scored both Phish and Sound Tribe Sector 9ine to play our grand opening! You really shoulda been there. (^.^)
Posted in Uncategorized | Leave a comment

Quick – what’s the most visible sound gear at a concert? Large, imposing, occupying large chunks of real estate right at the front of the stage, they’re the elements that turn inaudible electricity into the sound waves everyone hears. It’s the speakers!

Yet for all their importance, the typical quality of SL speakers is downright abysmal.

Have you been to an actual RL music concert? I’m guessing the speakers they used there were not studio monitors enlarged to elephantine proportions. No matter how big you make a desktop speaker, it’s not going to magically turn into something that will be used at a live music venue. Speakers for sound reinforcement are specifically engineered to fulfill the demands of touring. And as a purpose-built product, they have distinctive characteristics that make them readily distinguishable to their home stereo counterparts.

Another thing that RL concert sound equipment is not, is a wall of Marshall 4×12 cabs. A wall of Marshall cabs is good for guitar (actually, all those shredding guitar heroes have only one or two of those amps on). However, it is absolutely terrible at reproducing the clarity needed for vocals, the thump required for kick drum, or the shimmering highs needed for cymbals.

Large-scale concerts in RL are not addressed by stacking up a near-infinite number of little boxes made for vocals in small rooms. Multi-box arrays are the norm for load-in/load-out manageability and trucking purposes, but they are engineered in a manner that takes this arraying into account.

While low-end music-store (MI) grade boxes have their place with baby bands in small rooms, pro sound in large venues consists of upmarket gear you can’t buy from your friendly local Banjo Center (at least not without special ordering).

So with the above in mind, here is what I see as flaws in most speakers across the grid:

With the above in mind, I have decided to focus upon speakers as RealSoundGear’s first lines of SL music products. These speakers will be:

Having labored intensively to get the stage built, the gear positioned, and the system tuned, the roadies of RealSoundGear take a brief well-deserved pause just before doors…